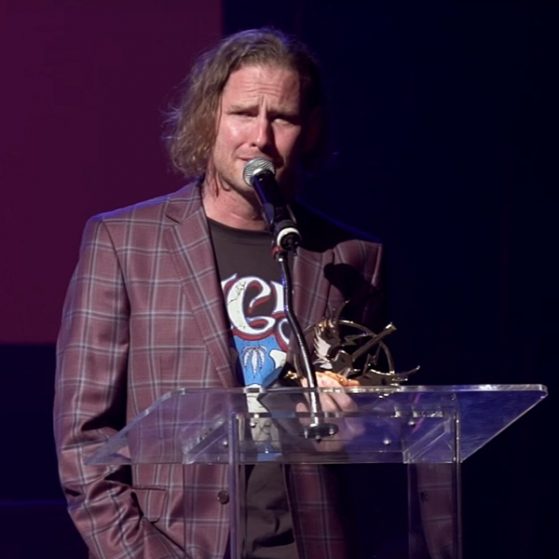 Corey Taylor (SLIPKNOT and STONE SOUR) was honored with the “Icon” award at Rock To Recovery’s second annual awareness event and benefit on Saturday, September 16 at the Fonda Theatre in Hollywood, California.

The Rock To Recovery “Icon” award is given each year to a public figure, known far and wide, that uses his or her power to influence great masses of people. With this award, Rock To Recovery specifically honors someone who has battled addiction, to overcome, in an industry full of challenges.

The SLIPKNOT and STONE SOUR singer, who tried to commit suicide in 2003 by attempting to jump off a hotel balcony while struggling with alcoholism, gave an inspiring acceptance speech at Rock to Recovery 2 – Benefit Concert in which he touched upon his struggles with depression and anxiety and how he’s attempted to work through them with therapy, healthy habits and sobriety.

After being introduced by former KORN guitarist Wesley Geer and SNOT/ex-SEVENDUST guitarist Sonny Mayo, a visibly emotional Corey began by telling the crowd, “I don’t really know what to say,” before pausing and attempting to regain his composure. At that point, someone in the audience yelled out, “We love you, Corey,” to which the singer responded: “I love you too. I love everybody here.”

He continued: “It’s been eight years, and you put a lot of shit in perspective. You have a lot of time to think. You have nowhere to go with it. Your trial and error becomes your way of life, who you are is a question every day, and why. And in this industry, that ‘why’ is kind of wrapped up in a lot of weird shit. So the great thing about this program, this organization is it takes away all of that shit. It takes away the stigma of trying to be a better person, trying to be a stronger person, a healthier person. It takes away the feeling of being alone, surrounded by people who are doing the exact same stuff that you do. And it lets you enjoy it again, which is a fucking hard thing to do when you’re force-fed an idea that it’s only cool if you’re fucked up. It’s not. It’s actually better once you get your head together, or try to.”

Taylor added: “So if I tell you anything… I had my first drink when I was five years old, did my first drug when I was eleven, and it was just all fucked up from there. I lost a lot of friends.”

Corey once again broke down, fighting back tears, as he wrapped up his speech with the following words: “One day at a time. And every day is a gift. So thank you for having this gift with me.”

Geer founded Rock To Recovery on December 12, 2012, in an effort to give non-musicians access to the magic, healing powers of playing music, and advance the use of music expression groups in various treatment settings. In each session, program participants form a band, write a song together, and record their work, offering an uplifting, therapeutic release to patients recovering from PTSD, alcoholism, drug addiction, depression, cancer treatments and more, by organically helping improve body/brain chemistry by stimulating the natural release of serotonin, dopamine, endorphins, and oxytocin. Rock To Recovery typically operates as an adjunct service to a treatment center’s curriculum, and in just four years, the program has grown to become an integral part of the weekly treatment curriculum for nearly eighty programs.

Rock To Recovery’s non-profit entity donates its services to the U.S. Department of Defense’s Wounded Warriors program, state-funded programs and indigent rehabs like the Salvation Army and Clare Foundation, programs for at-risk youths including Turning Point and North County Lifeline, as well as Breath of Heaven, and local VA programs including New Directions for Veterans and the Brentwood VA.

Prior to the inception of these annual concerts, Rock To Recovery has been entirely self-funded. Due to the program’s success and subsequent demand, coupled with the overwhelming successes of last year’s event, the organization will continue to grow its reach through these annual fundraising celebrations in order to bring the healing power of music to more people.